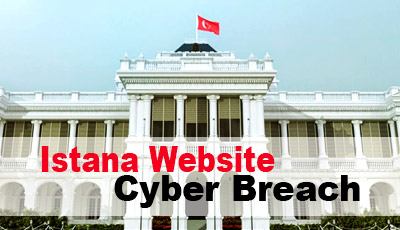 The Istana Website Hacking incident occurred on 8th November 2013. The security breach of the official cyber- domain of the Singapore’s Presidential Office, Istana website cyber breach was definitely a cause for some chaos, especially for a country which was already dealing with numerous hacking attacks coming to the headlines frequently. For a state having so many cyberattacks to deal with already, the Istana website cyberattack was like adding kerosene to a destructive fire, something not in favor of anybody.

Initially, there were two suspects behind this event, Delson Moo and Melvin Tio, who executed multiple XSS attacks on the website, due to which a lot of valuable content was lost from the website. Among them, Delson Moo was a businessman, 42 years of age while Melvin Teo was still a student, and only 17 years old. It is said that they met randomly on Facebook until they turned into good ‘hacker buddies.’ On June 6, 2014, a verdict was made on the case, and they were declared the culprit, with Delson Moo being fined S$8000. Melvin Teo, later on, admitted that they had no definite reason for hacking the website, and they did only do it as a joke.

The hackers are said to have gained access to the website exploiting the search engine vulnerability. Then they moved on to do some things that would bring them a lot of troubles. Adding offensive pictures, insulting content and disabling some features in the website of the presidential office isn’t welcomed by the authorities, after all. And after the hearing was made, Moo also claimed that what he did was ‘stupid’ and he ‘got himself into trouble because his hands slipped.’ It is true that he was only made to pay S$8000 for this, but it could have gotten worse for the hackers, especially for Moo. He could receive jail time of 3 years had he been a first-time offender and up to 5 years in jail and even a fine of S$20000.

The XSS attack that the hackers did could be used for more severe activities than simply hacking a web application for fun. The XSS attacks consist of injecting a script into a web application by figuring out a vulnerability, and in the case of The Istana cyberattacks, the hackers used the Google search page, which was embedded in the site itself. Then they modified the original HTML code of the website with what they had crafted by themselves.

The Istana website cyberattack was just another instance which showed that many websites are not as secured as they should be. A high profile government website being hacked simply by a pair of individuals doesn’t give the right type of impression. By 2018, many other cyberattacks of this nature have already come to our way, and it is evident that we are still struggling with these types of crimes. And a lot of them have been very harmful, raising a lot of questions. So, right now, what’s needed is for all of us to come together and become more concerned about our internet security.