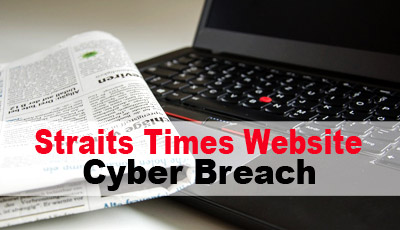 The Straits Times website cyber breach took place on November 1, 2013. During that time, a hacker, claiming to be a member of the Hacking group Anonymous broke into a section of the popular online news portal Straits Times, demanding a certain news article to be taken down because it was misleading. The hacker, who called himself “The Messiah,” went into a blog of the portal and posted the following words: “Dear ST: You just got hacked for misleading the people.”

The Reason Behind the Hacker

The cause for this was a news article which the hacker claimed to be misdirecting. Straits Times, on the first of November, 2013, had posted a news article whose headline read “Government Agencies on Alert after Hackers Threaten Attacks.” This news headline came after the Anonymous group posted a video on YouTube attributed “We will be forced to go to war with you.” According to the hacker, the reason behind the hack was one of the phrases in the article that read “war against Singapore” which, according to the hacker had to be “war against the Singapore government”.

Even after this incident, a lot of other warnings were made by “The Messiah” in the blog he hacked, where he demanded that the reporter, who wrote the article, which he claimed to be “full of hate,” had to apologize to the people for her misleading information. If not, she had to announce her resignation. And also, he warranted that if this condition were not made, there would be further consequences.  “The Messiah” also demanded the Media Development Authority’s licensing framework for websites to be taken down, like many other hackers. According to this regulation, every online news sites need to have a license, only then they can report issues related to Singapore on a regular basis. The hacker also claimed to be responsible for hacking several other local sites in 2013, where he targeted the sites such as the PCF, the Ang Mo Kio Town Council, Sun Ho, and City Harvest.

Message Made Out of Numbers and Strings

The hacker, in his post also included an encrypted message made out of numbers and strings. There, he also mentioned the trial involving City Harvest Church, and Kong Hee, its co-founder. During September that year, the Messiah had also hacked the personal website of Kong’s Wife, and threatened to leak evidence against him. In the blog, he also mentioned the baby- scalding incident at a PAP Communication Foundation.

This incident really came in as a surprise for a newspaper itself covering a lot of news based on cybercrime.  What happened during this time was the subject of talks for days, and even the incident is almost forgotten, the lesson shouldn’t be. Since the Straits Times Website Cyberattack in 2013, many other similar events have happened, and all of them show we must be alert. Not only in Singapore, but cyberattacks like this have also been a cause of the global concern, and it is necessary that all of us come together to minimize it as much as we can.