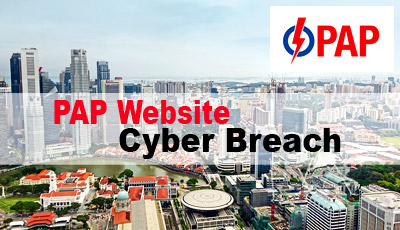 The PAP website cyber breach was one of the initial cyberattacks carried out by “The Messiah” in 2013. Following the Singapore government imposing specific new rules concerning the online news portals, a hacker got into a lot of websites and also threatened to take apart Singapore’s IT infrastructure if the law wasn’t amended. And this was the reason why many cyber breaches including the PAP website cyberattack took place in 2013 in Singapore between October and December.

Hacker From the Group “Anonymous”

On October 16, 2013, a hacker from the group “Anonymous” defaced the front page of the website of the People’s Action Party’s Community Foundation (PAP), where he mentioned “It’s Great To Be Singaporean Today” with a picture of the Guy Fawkes mask, the trademark symbol of the group Anonymous. First, it might not have been given a lot of attention, but that was not the case when quickly, many other similar cyberattacks kept on coming, with the hacktivists getting into other websites such as of the Ang Mo Kio Town Council, The Straits Times, and a lot, where, similar messages were left.

All of these site breaches, including the PAP website cyberattack, came in after on June 1, 2013, the Media Development Authority drafted a new rule in Singapore regarding the online news handler. According to it, every online news publishers are to get a license that they should renew annually, and they will also need to take down any content if they are prohibited by the Singapore’s Media Regulator. The government of Singapore also stated that the rules wouldn’t be a hurdle for internet freedom, but Anonymous didn’t think so. They uploaded a video on YouTube, demanding the rule to be taken down and if not so, they also warned that consequences might follow.

This did happen, actually, and many sites, because of their low-security provision, were hacked into by a member of Anonymous, “The Messiah.” The frequent cyberattacks were soon on the headlines everywhere, and it also showed how weak the site security system had been at that time. Investigations were soon to follow and on January 2015, James Raj, “The Messiah”, was sentenced to a five years jail time after found guilty of the at least 39 chargeable cyberattacks and a drug charge.

The 2013 cyberattacks including the PAP website cyberattack are something that the authorities hope that didn’t happen, but what is for us to remember is that there are a lot of positives to take from them. The breaches showed clearly that the security provisions in many of the sites were not up to par and also due to this, many sites were prompted to review their security features. After this incident, the regulations regarding cybersecurity were made stricter, and many other potential attacks have been avoided. The vulnerabilities causing the 2013 cyberattacks have already been resolved, but this doesn’t mean that there can’t be any other attacks like this in the future. So, all we have to do now is to become more concerned about our security when we are on the internet, and that is how we can be prepared for any such cyberattacks that could be on our way.